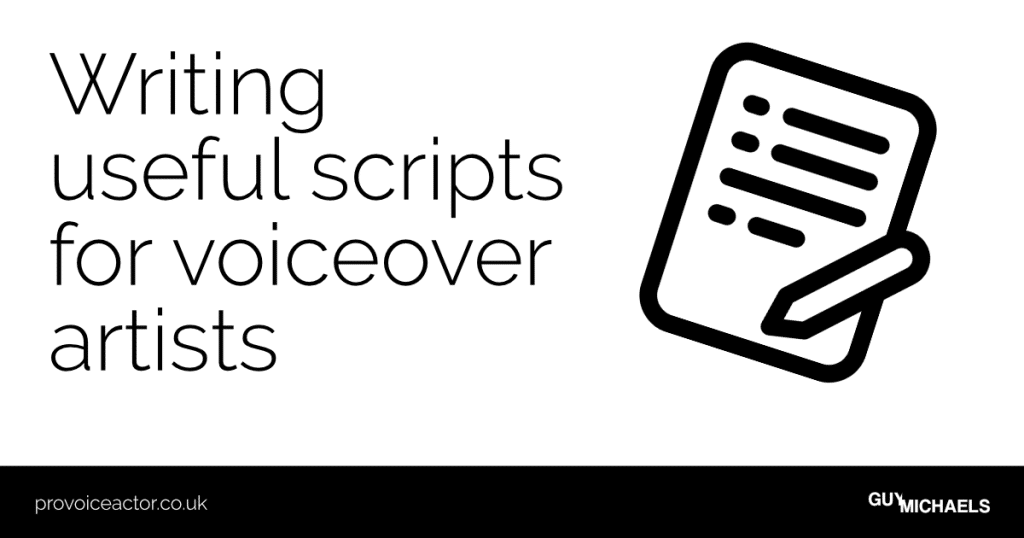 In the grand scheme of voiceover production, it’s likely that the voice actor you are working with has seen and recorded far more scripts than you have written. So here are a few tips for a better understanding of the voiceover artist’s perspective.

There’s plenty of guidance out there on how to write great voiceover scripts. This guidance is usually focussed (and rightly so) on the clarity of the message and how to influence the audience and urge them to take the desired action. But what about making it easier for the voiceover artist?

In the shoes of the voice actor

Voice actors want to work with you. You are booking them for their interpretation skills, instincts and experience.

When you are writing a voiceover script, do you consider the voice actor and what will be really helpful for them? Doing so can make sessions run smoother and the end-result far more effective, trust me!

You’ve chosen your preferred voice over guy or gal and now it’s time to set up the recording session and provide a script. Your know your target audience and write a clear message to grab the audience’s attention. You (or your team) have decided upon the tone and aims of the script and come up with something that you are happy with. You send the final voiceover script to the VO and it’s met with unvoiced reactions ranging from confusion to despair!

Less experienced voiceover artists will generally be too reticent to voice their confusion (or despair) but it’s advisable that you encourage the VO to give feedback. After all, they need to be fully comfortable with the copy in order to deliver their best performance. Check with them that it all makes sense.

When writing useful scripts for voiceover artists, there are a number of things you can do that will ultimately save time and improve the quality of work.

I asked two voiceover friends Carrie and Lucy, and the first thing they both raised was:

“I wish they would read through the script out loud before signing it off. ”

Most definitely always do this.

“always, always print off the script and read it out loud before going for the final edit. If you struggle with reading a 20 word sentence without commas then you shouldn’t expect a VO to say the same with “energy” and with no pauses for breathing. ”

So before you send your script to the voiceover artist, read the final script aloud for both flow and timing.

If you are aiming for ‘conversational tone’ like so may voiceover jobs these days then check that too. Do the words, in the order you have placed them, lend themselves to a truly conversational feel?

It’s all very well sticking ‘conversational tone’ down as a direction for the voice actor but sometimes this is seriously difficult with a bad script.

Read the script aloud with a colleague listening. Do they have any feedback? Does it sound natural? The ‘spoken word’ and ‘written word’ are not necessarily the same thing. Although a highly experienced professional voiceover will do their utmost to make it sound natural, do them, yourself and your target audience a favour by performing this simple check.

Lucy expands on this “write scripts to be spoken as we speak naturally and not to be read – for example we generally don’t use words like “thus” or “hereby” in natural, everyday speech so leave them out of scripts.”

Chuck out those odd words that are likely to just confuse your audience and make it sound stilted!

Just a couple of things from me here. The first is NEVER WRITE THE ENTIRE SCRIPT IN CAPITALS AS IT WILL MAKE ME WANT TO SHOUT IT!

The second is ‘page spill’. If it’s a longer script, then try to avoid sentences spilling onto the next page. Consider the voice actor at the microphone with the script in front of them and losing flow as they have to swap pages……….mid-sentence.

Also, keep it clean. I don’t mean in terms of profanity but ‘the page’. Keep it cleanly formatted. I’ve worked with scripts that have so much info on that is really only relevant to the animator, videographer etc that I’ve struggled to actually locate the words I’m supposed to be recording!  It’s not just about writing useful scripts for voiceover artists, it’s about making them clear and easy to read too.

Although screenshots of video footage and the like can be useful, in most cases we just need the words when it comes to the recording session. We need space on the page to make our own notes too.

Although we can reformat and edit the text in Word and change the font of course, please make it as easily readable as possible. Considering this is greatly appreciated.

Any voiceover professional will have tales to tell about disagreements over pronunciation. At the end of the day, as the writer of the voiceover script, just be clear.

Carrie adds to this and suggests one of the ways to avoid script changes/pickups (at potentially extra cost and wasted time for all parties).

“Difficult or unusual pronunciations….. I love it when they include a video link or a wee audio file with the correct pronunciation. It saves me so much googling time for company or project names.”

Great voice over scripts do all of the above.

Oh and get those scripts (the final versions) to the voiceover artist as soon as possible and in advance of the record. The voice talent (as they say in the States) will then have time not only to practice but also to raise any issues with the script.  Writing useful scripts for voiceover artists takes some careful consideration and should be at the forefront of your mind in every project.

Read more on how you can help in the preparation and recording stages for your next voiceover session.

If you want to access some practice voiceover scripts then my platform Voiceover Kickstart has a huge script library.

Guy Michaels is a British Voiceover Artist based in England.  He likes robots and has a collection of them.